Siim Einfeldt
2009-11-11 07:03:29
comment article
The world as we know came to an end in 2012 when the Mayan world exploded and people, our people are still divided by a fine line. One side believes in the existence of the higher power while the other still likes the sperm in the exploding tube theory which resulted in dinosaurs, monkeys, billions of years old earth. Today I would like to share 10 indisputable facts with you, facts that will once and for all, prove that there is a god!

1. The world was created in 6 days by the god almighty, on seventh day he chillaxed (editor's note: Americans are currently trying to modernise the language of the bible, so changes have occurred). This is an indisputable fact because it's said so in the bible and it must be the basis of all other facts. 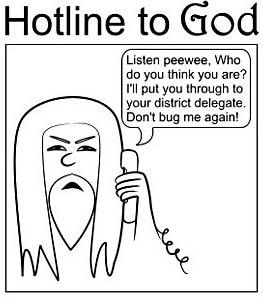 2. The bible was written by many different people, edited by another many, unreal things were taken out, uninteresting facts were changed, too easy and understandable language was deleted. If the bible would have been written by just one person and based on only his knowledge, it would have been wrong, but it was put together by writers association based on chill'day ceremonies.

3. Millions if not billions of people believe in God. If God didn't exist, it would mean all those people are kind of stupid, wouldn't it? And that can't be the case!

4. Nobody can say there is NO god, it is not possible to scientifically prove it. And that's an indisputable proof all by itself.

5. The God, as we know it, is the most powerful creature ever existed. How else could have he/it have wiped out the entire selection of other gods. Somehow he managed to seduce Roman goddess Venus, take the alcoholic spirit of Bacchus, Rome's most popular god, steal the cloud from under Zeus's arse, make arrangements with Hera. And these are just some gods he managed to get rid of, in order to get all the power to himself. Not to mention the fight between him and the Danish god Thor, son of Odin, who was the strongest god of all with red hair and beard, slaughtering with a huge hammer in his hand. And that all is yet another indisputable fact.

6. Generally speaking, humans are moral beings. And there is no way we would have ever figured out not to just kill each other if there was no god. We are simply not that intelligent. Wars can ONLY be held and people killed in order to turn others into moral beings as well.

7. If there was no god, there would be no atheists. No comments required.

8. The reason why we have never seen god is simple - to God such human concepts as time does not apply and he's on a very different scale than humans. This is the reason we will never be able to see nor understand him. We must believe, or else we'll end up in hell. And God knows that he's talking about - you know - been there, done that. 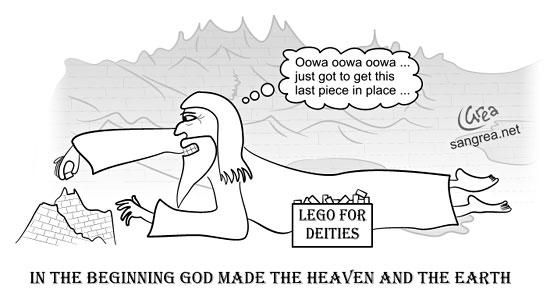 9. It doesn't matter if you are an agnostic, atheist or believer of the sperm monkey, all of us still argue or inquire about god. And that all by itself is the proof of his existence, indisputable proof.

10. If your life sucks and you don't believe in god, then you can't even die happy. So god MUST exist.

The reason why our God became our God was because people were pressed by emperors and suddenly there was a man saying he's the son of god and everything he says is true. It is simply impossible to imagine that this man was just a lunatic with creative imagination who gained popularity and belief just because people wanted to believe in him. That can't be the case. If today someone came out with the same theory, we would welcome him, we the ordinary people that is. Well, as long as he stays quiet and doesn't say the other god is not a god at all. Well, like Jesus said about the godly emperors.

By the end of the day, we can't go around not believing any old thing just because it can't be proven.

That would be absurd, right?