Confessions of an unstable Editor-In-Chief: My 15 minutes of Fame

Siim Einfeldt
2009-11-11 07:03:29
comment article
After my last week's confessions, not sure if I remembered to put them on paper or not though, you were probably sure that I would end up in some mental institution. Some place where they would never let me out again. Sorry to disappoint you, I'm still here. Big as hell, twice as stupid.

Independent of what you may think of me, I actually did receive two answers! That's good, right? Of course, it's good if people read your column and contact you after that. Of course. Usually, it really is. But how would you like to get an email which consists of 37.5 death threats from different people? You fuckers! Don't you have anything better to do than just waste your time writing useless emails that no one read one way or another? Why should I read something like "I'll take your penis, cut it in half and paint it blue" or "Have you checked your car for bombs recently?" or "Shoot yourself or else" (that 'else' was the 0.5 of 37.5). These threats are totally stupid, a waste of time. Some of them even had spelling mistakes which I - I repeat I had to correct. And the style still sucks. So if you feel that you would like to learn, I'm here to help you. This way you can at least learn how to write death threats. You Idiot. 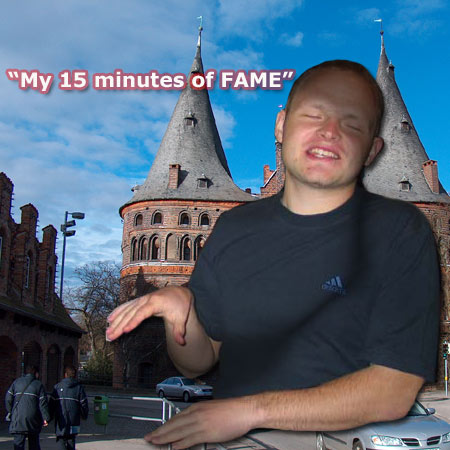 My 15 minutes of fame
Now here I am, laying in the hospital bed.But I'm not alone. There's a lot of photographers and journalists from other media ventures (mainly tabloids...though) keeping me company. All wanting to get an interview from me - interview about me, my now ex-girlfriend, her baseball bat and, of course, my grandma. It might sound weird, but I believe that it's my 15 minutes of FAME. And I'm gonna take the most of it. I'll give a press conference right after I have finished with this stupid column.


The Daily Bonk - your made up news site